You’re running late, you’re trying to get a handle on the bills they just called up on special orders, and there are seven bills on your committee calendar for this afternoon. When you need to quickly remind yourself of what’s in a bill, check the summary that appears on the first page of every bill. While the bill summary probably will not tell you all you need to know, it can jog your memory. But before you rely too heavily, if the bill has already passed out of the house of introduction, remember to check for an updated summary.

Rule No. 29 of the Joint Rules of the Senate and House of Representatives requires that every bill and concurrent resolution include a brief summary written by the Office of Legislative Legal Services. These summaries attempt to describe in plain language what the introduced version of the bill or concurrent resolution would accomplish. 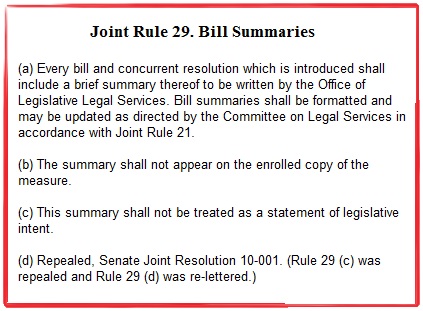 bill being summarized) and that provide a succinct, clear, and accurate synopsis of the  major points of the bill in a format that’s easier to read and, hopefully, understand than the actual language in the bill. Drafters try to avoid using legalistic and technical words in the bill summary. However, there are circumstances when the use of legal terms is necessary to avoid confusion or a misleading summary. Bill summaries are not a rewrite of the entire bill but should give the reader a clear idea about what the bill is doing. The only way for a reader to be sure of the details in a bill is to read the full bill.

Bill summaries take many forms and may include any of the following items, depending on what the bill is doing:

All bill summaries start with this heading and note:

The original summary for a bill or concurrent resolution is a part of the bill document and remains unchanged on the face of the bill as it moves through the legislative process. As the bill moves through the legislative process, it may or may not be amended. In most cases, the bill is amended — slightly or significantly. These amendments may or may not require a change to the bill summary, depending on the significance of the amendments and the level of detail included in the original summary. For a substantial number of bills, the original bill summary is an accurate summary of the final version of the bill that is delivered to the Governor for signature.

If a bill is significantly amended during the legislative process in the house of introduction,

Previous Post: A New Interpretation of “Amendment 41” and Gifts of Travel: Maybe You Can Attend that Conference!
Next Post: Use the Bill Versions to Map Your Way Through the Legislative Process