by Jennifer Gilroy and Michele Brown 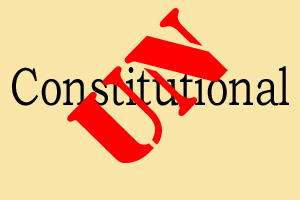 A librarian at the Sturm College of Law (at the University of Denver) recently called our office to ask what happens to a statute when it is declared by an appellate court to be unconstitutional. Perhaps he figured the revisor of statutes would simply and unceremoniously strike it from the books. Or maybe he thought that the legislature would automatically know and run a bill to repeal the offending provision of law. But it doesn’t exactly work that way. In fact, Colorado has several “unconstitutional” laws still on the books. Say what?

To understand the reason for this phenomenon, it’s necessary to go back to basic 8th grade American Government class. State government, like the federal government, is split into three branches: The executive branch, the judicial branch, and the legislative branch. One cannot do the work of the others. While the executive branch may enforce the law and the judicial branch interpret the law, only the legislative branch may write the law or, in this case, repeal it. Therefore, despite the fact that the highest court in the land may have determined that a Colorado statute (or a section of the state constitution) is unconstitutional, only the legislature may take the statute off the books by bill. The constitution may only be amended—even if the amendment is to remove a provision declared to be unconstitutional—if the change is approved by a majority of voters voting on a ballot measure or on a measure referred to the voters by the General Assembly. The court cannot require the repeal.

Legislators in the Colorado General Assembly may introduce only five bills during each regular legislative session. (See Joint Rule 24 (b)(1)(A)). As a result, many legislators who have so many things they want to accomplish during their brief, term-limited tenure at the state capitol do not want to “spend” one of their five bills on a housekeeping matter, as it were. Are you starting to see why some of these laws linger on the books long after they should? In fact, in Colorado dozens of statutory and constitutional provisions that have been held to be unconstitutional still linger on the books.

How does the average reader of our laws, then, know whether a statute (or constitutional provision) is really “good law?” The General Assembly’s legal staff at the Office of Legislative Legal Services vigilantly reads all of the appellate opinions issued by the Colorado Court of Appeals, the Colorado Supreme Court, the United States District Court for the 10th Circuit, and the United States Supreme Court looking for opinions construing Colorado’s law and, in particular, opinions declaring any provision of Colorado law unconstitutional. The Office’s legislative lawyers and legislative editors write brief summaries of every court’s holding that interprets a provision of Colorado law. These “annotations,” as they are called, are then published in the official Colorado Revised Statutes (also found online) immediately following the section of law that is the subject of the court’s ruling.

If the court has actually determined that the provision of law is unconstitutional, the Legal Services staff will include a special editor’s note to that effect, which the reader will see immediately following the source note at the end of the section of law. The editor’s note notifies the reader that this provision has been held to be unconstitutional and provides the citation to the case so construing the law. The staff will also include an editor’s note if, for example, the U.S. Supreme Court has determined another state’s statute to be unconstitutional and that state’s statute is substantially similar to a Colorado statute. [For an example, see the editor’s note regarding an Arizona statute after §18-1.3-1201]

But unless it’s reported in the news, how does a legislator know that one of Colorado’s laws has been found to be unconstitutional? Well, in addition to writing annotations and editor’s notes regarding the court’s holding, the Legal Services staff also provides the members of the state legislature with a quarterly report of recent judicial opinions of note. The Notice of Judicial Opinions provides the members with information about recently issued appellate court opinions construing Colorado law and, if any opinion addresses the constitutionality of a state law, it is highlighted in the report. From this report, members of the legislature are notified that an appellate court has determined that a law on the books is unconstitutional and is therefore “ripe” for repeal. Finally, Legal Services staff also tweets about significant court rulings when they are released.