by Julie Pelegrin and Nate Carr

The Second Regular Session of the Seventy-first General Assembly is underway. Based on recent media coverage and the opening day remarks by legislative leadership, we know that some of the anticipated hot topics are funding for roads and bridges, teacher shortages, addressing opioid addiction, affordable housing, health care, rural broadband access, and shoring up the Public Employees’ Retirement Association. And people are hoping to address all of these issues in a spirit of bipartisanship in order to find workable solutions.

We thought it would be interesting before we get too caught up in the 2018 session to look back and see what was happening in the 1918 session. What issues were our legislative forebears tackling one hundred years ago?

Turns out, in 1918, they weren’t tackling anything legislatively. Before voters amended the constitution in 1950, the General Assembly met regularly every other year in odd-numbered years. They met in even-numbered years only if the Governor called them in to special session, which Governor Julius C. Gunter did not do in 1918. Not that there wasn’t a lot going on in Colorado in 1918: the federal government broke ground on “World War I Army Hospital 21,” later renamed Fitzsimons Army Hospital; the Broadmoor resort opened in Colorado Springs; the Influenza Pandemic of 1918 started in Colorado in September, ultimately killing nearly 8,000 Coloradans; and World War I ended on November 11.

Not to be deterred, we decided to see what the General Assembly was considering 101 years ago, when they convened in 1917 for the Regular

Session of the Twenty-first General Assembly.

The Twenty-first General Assembly convened at “12 o’clock, noon” on Wednesday, January 3, 1917, as required in the constitution at the time. Lieutenant Governor Moses E. Lewis, whose term ended on January 9, 1917, gaveled the Senate to order. He was replaced by James A. Pulliam, who presided as Senate President for the remainder of the legislative session. We should explain that, under the constitution until 1974, the state’s Lieutenant Governor served as President of the Senate, voting only to break a tie.

Mr. Erlo E. Kennedy, Chief Clerk of the House, called the House of Representatives to order and, after the committee on credentials reported that the persons elected the previous November, as certified by the Secretary of State, were entitled to their seats as provided by statute, Representative 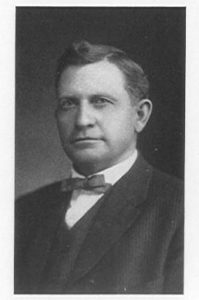 Boon Best of Arlington, CO, was elected to preside as Speaker of the House of Representatives.[1] And yes, Speaker Best was a descendant of Daniel Boone. (See Presidents and Speakers of the Colorado General Assembly, Denver, Colorado, 2016 Edition.)

Alcohol and marijuana were both on the list. On January 1, 1916, Colorado became a dry state (Colorado was leading the nation even then). Not surprisingly, in 1917, the General Assembly considered and passed a law to limit the purchase and sale of alcohol to licensed wholesalers and licensed manufacturers. The intent was to ensure that alcohol was used only as a “component part of some manufactured article, and that no article ordinarily used as a beverage will be manufactured therefrom.” The General Assembly also passed H.B. No. 263, carried by Rep. Andres Lucero from Saguache, to “declare unlawful the planting, cultivating, harvesting, drying, curing, or preparation for sale or gift of cannabis sativa,” also known as “mariguana”. The penalty was a fine of $10-$100, or up to 30 days in jail, or both.

But there were issues to address. He cited an investigation of the public education system, which showed that the system

provides for no efficient control or supervision of the schools by any state or county agency; does not provide for equality of opportunity; does not place the burden of support of schools equally on all property; [and] favors the city and town at the expense of the country. 1917 Senate Journal, Tuesday, January 9, 1917, 7th Legislative Day, pg 86.

He asked for collaboration in making the school system more efficient and “to properly recognize by salary and otherwise, those giving their lives to this respected and useful calling,” i.e., teaching.

The Governor raised myriad other issues, including state highways (“investment now more than $22,000,000”), encouraging the legislators to work

with the director of the department to further develop “this great asset of the state.” He encouraged the legislators to raise funding for buildings and equipment at the state institutions of higher education and to appropriate state money to enforce the minimum wage law for women and minors. He called for legislation to “rearrange” the judicial districts and to adopt for the state a “Budget System for the expenditure of all moneys required for maintaining the government and the institutions of the state.”

In all, the members of the General Assembly introduced 434 Senate bills and 587 House bills; passed 155 bills; and adjourned sine die on March 24, 1917, at noon. In his state of the state address in 1919, Colorado Governor Oliver H. Shoup recognized the 1917 session as “the shortest regular sitting in the history of the commonwealth, the most fruitful in a time of greatest peril in the life of the state.”

Less than a month after the 1917 session adjourned, on April 6, 1917, the United States declared war on Germany and entered World War I. So maybe it’s not so surprising that there were no special legislative sessions called during 1918.