Hang around either chamber of the Colorado General Assembly at, say, 10 a.m. on a weekday and you’ll notice something striking. Amidst the speaking, the voting, the throng of lobbyists, the visitors along the walls, and the fast pace of the legislature at work, there are a few people actually making sense of the chaos. You’ll see them in their green (House) and maroon (Senate) jackets, delivering documents to legislators, keeping the aisles clear, ensuring appropriate decorum is upheld, and maintaining the security of the chambers. In the afternoons, they provide security for committee meetings, and throughout the day they also enforce parking laws on the capitol grounds. They are the security officers, or sergeants-at-arms, of the Colorado General Assembly, and they’re heavily relied upon to keep the wheels of the legislature turning.

So why are they called sergeants?
Karl Kurtz, formerly with the National Conference of State Legislatures (NCSL), looked into this question some years back in an article for NCSL’s The Thicket in which he looked up the etymology of “sergeant at arms.” He wrote that dictionaries agree that “sergeant” is derived from the Latin, serviens, meaning serving or servant. He further explored the online Britannica Encyclopedia and found the following definition:

an officer of a legislative body, court of law, or other organization who preserves order and executes commands. In feudal England a sergeant at arms was an armed officer of a lord and was often one of a special body required to be in immediate attendance on the king’s person, to arrest traitors and other offenders. Through this function, the title of sergeant at arms eventually came to denote certain court, parliamentary, and city officials with ceremonial (and ostensibly disciplinary) functions. Each house of the British Parliament has a sergeant at arms, as does each house of the U.S. …

The sergeants have been present in the chambers of the Colorado state house since the first legislative session of the territory. Here in fact is the page from the legislative manual of 1861 that lists the names of the sergeants for both the Council and the Representatives: 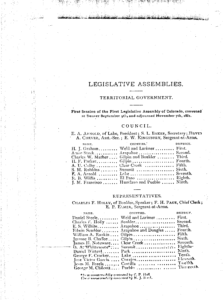 Records from that year show that Mr. Kingsbury and Mr. Elmer were paid “in addition to their regular compensation, the sum of three dollars per day.”

In 1877, the book of general laws of the newly founded state of Colorado, page 487, reads:

We call them ‘the enforcers,’ but the House Sergeants have always been the most accommodating group of individuals you could meet. They are people- and service-oriented, and are 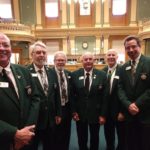 willing to do most anything to help anyone. There really isn’t much that the House Sergeants don’t do. – Marilyn Eddins, Chief Clerk, House of Representatives

So what is the role of a sergeant-at-arms in modern times? Consider House Rule 44: Other Officers and Employees:

(a) The sergeant-at-arms shall attend the House during its sittings, shall maintain order in the House chamber and the approaches thereto at all times…

(b.5) The sergeant-at-arms and the assistant sergeants-at-arms shall be selected without reference to party affiliation and solely on the basis of ability to perform the duties of their positions.

(a) Any five Senators may demand a call of the Senate, and require absent Senators to be sent for… and those for whose absence no excuse or an insufficient excuse is made, shall be sent for and taken into custody by the sergeant-at-arms…

In the House, it’s Rule 19: Call of the House requires 10 members to initiate. In addition, both houses have rules regarding executive or secret sessions and the role that the sergeants play in securing the chambers as well as their duty to keep silent regarding such proceedings. (House Rule 17 and Senate Rule 27.)

Ninety-four years after statehood, in 1973, the role of the sergeants as peace officers was statutorily codified in section 2-2-402, Colorado Revised Statutes, as follows:

(2) Such chief security officers are hereby designated to be peace officers and shall have jurisdiction to act as such in the performance of their duties anywhere within the state.

(3) Each house may adopt rules regarding the organization, supervision, and operations of its security staff, prescribing the qualifications, training, and duties of its security officers and all other matters relating to the performance of their responsibilities. 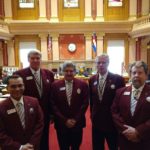 The Senate Sergeants are a wonderful group of people who do their daily tasks with professionalism and a smile. They provide a sense of order and decorum to the chamber while enforcing the rules and procedures of the chamber. The pragmatic tasks they perform on a daily basis in the chamber as well as in the Senate Committee rooms makes the Senate the well-oiled machine that it is. We could not do it without them. – Kevin Grantham, Senate President

While the sergeants-at-arms don’t get loose-lipped about the things they’ve seen over the years, stories abound. There’s the one about finding a missing member in a dentist chair in Ft. Collins and returning him to the House chamber to vote. On another occasion, a legislator said to have been in Pueblo was returned by the state patrol, upon the request of the sergeant-at-arms, to participate in a House vote. There are rumors, too, about sergeants having to dissuade legislators from slipping out of windows on Sine Die (the last day of the legislative session)! Regardless of what hijinks are occurring and how fast-paced the work might be, the sergeants-at-arms do their work with the utmost professionalism, and a friendlier cadre cannot be found on the capitol grounds.

Author’s Note: My thanks to Theresa Holst and Molly Otto.