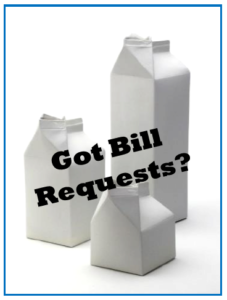 Bill requests may be forfeited if the request does not meet specific filing deadlines.*  Prior to the start of each session, a legislator must decide which of his or her

bill requests will be his or her “prefile” bill (to be filed and ready for introduction on the first day of session).  And, of course, which two bill requests will meet the other early bill introduction deadline. At some point at the start of session, a legislator must also decide which two bills will meet the regular bill deadlines.
The filing deadline for prefile bills is normally five days prior to the start of session. This year, however, the prefile deadline is Friday, December 28, 2018. Each legislator must have one bill delivered to the front desk of the House or the Senate by this date or consider one of his or her bill requests as forfeited.*

The House and Senate early and regular deadlines for filing bills for introduction vary by chamber:

The Office of Legislative Legal Services (OLLS) encourages legislators to designate their prefile bill and other early bills (i.e., the bill order) as soon as possible in early December so that the OLLS can prioritize the drafting on these bills accordingly. If the OLLS does not have a legislator’s bill order on record, we will contact the legislator for this information and will continue contacting the legislator until the information is received.

*  A legislator can ask for permission from the House or Senate Committee on Delayed Bills, whichever is appropriate, to submit additional bill requests or to waive a bill deadline to a different date.