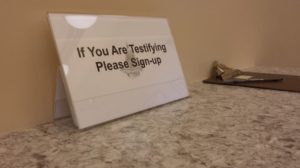 The Colorado Commission on Uniform State Laws (CCUSL) is Colorado’s delegation to the national Uniform Law Commission (ULC), which is comprised of more than 300 commissioners appointed by all 50 states, the District of Columbia, the U.S. Virgin Islands, and Puerto Rico. The CCUSL meets each year during the ULC’s July annual conference to identify a preliminary legislative agenda of approved uniform acts for potential introduction in Colorado. The CCUSL then typically hosts two to three public meetings at the state capitol to discuss its proposed legislation and to finalize its legislative agenda. The CCUSL sends advance notice of the meetings held in the capitol to interested parties, posts meeting information on the General Assembly and the CCUSL websites, encourages public testimony at the meetings, and broadcasts the meetings over the internet.

(For links to Colorado bill drafts for most of the acts listed above go to the CCUSL Meeting Documents Archive page and open the agenda for January 11, 2019.)

The CCUSL has left the following uniform acts on its legislative agenda for additional discussion and future consideration:

Other articles regarding the ULC and CCUSL: