You’ve worked hard to get your bill through both houses and onto the Governor’s desk. You worked with your colleagues on amendments to be sure the bill language clearly and explicitly said just what you intended. Now, the act is signed and on its way to implementation and you can rest easy. Right? Hopefully right. But there may be some people who don’t agree on what this new statute means or on what your carefully crafted language says. Some of these disagreements may be so serious that someone files a lawsuit asking the court to interpret the precise meaning of this new statute. How is the court going to interpret your bill and decide what it means? 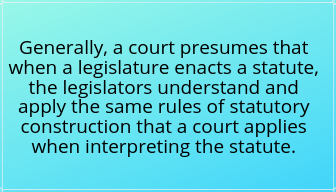 This series of articles is intended to provide a helpful and informative overview of those rules.

We’ll begin the series by looking at one of the basic ground rules a court applies when reading statutes. When someone asks a court to interpret a statute, the first thing the judge does is read the statute. If the statutory language is clear on its face and there is no reasonable doubt as to its meaning, then the judge will simply apply the language of the statute to the case at hand. This is known as the “Plain Meaning Rule.” The judge will decipher the plain meaning of a statute by applying the ordinary, everyday definitions of the statute’s words, unless the statute itself provides specific definitions of the words.

Colorado actually has a statute, section 2-4-101, C.R.S., that supports the Plain Meaning Rule:

And as section 2-4-101, C.R.S., requires, the judge will read the statute in context, as a whole and try to give consistent and sensible effect to all parts of the statute. A judge assumes that the General Assembly intended the entire statute to be effective and did not include any statutory language that has no meaning or effect.