You’re running late, you’re trying to get a handle on the bills they just called up on special orders, and there are seven bills on your committee calendar for this afternoon. When you need to quickly remind yourself of what’s in a bill, you will be tempted to just check the summary that appears on the first page of the bill. But, unless the bill is in the first committee in the first house, you must resist this temptation. That’s not to say the bill summary printed on a bill can’t be helpful. While the bill summary may not tell you all you need to know, it does provide a quick overview of what the bill is doing when it’s introduced. But beware, if the bill has already passed out of a committee in the first house, it may have been amended by that committee, and those amendments will not appear in the bill summary. In this situation, there may be other options you can turn to.

Rule No. 29 of the Joint Rules of the Senate and House of Representatives requires that every bill and concurrent resolution must include a brief summary written by the Office of Legislative Legal Services (OLLS). These summaries attempt to describe in plain language what the introduced version of the bill or concurrent resolution will accomplish if passed.

The OLLS aims to write bill summaries that are brief (relative to the size and scope of the bill) and provide a succinct, clear, and accurate synopsis of the major points of the bill in a format that’s easier to read and, hopefully, understand than the actual language in the bill. Drafters try to avoid using legalistic and technical words in the bill summary, but sometimes using legal terms is necessary to avoid confusion or a misleading summary.

Bill summaries take many forms and may include:

On paper and electronic copies of bills, all bill summaries start with this note:

If a bill is amended in a committee or on second or third reading, the bill summary that’s printed on the bill or that appears on an electronic copy of the bill does not change. This is true whether the amendment occurs in the house of introduction or the second house. So how can you quickly see how a bill may have changed?

adopted by a committee as they appear in the text of the bill. The changes made by a House committee are shaded; the changes made by a Senate committee are double-underlined. If you open the unofficial preamended bill, you can easily scroll through it to see changed language. These changes, combined with the original bill summary, will help you quickly come up to speed on the bill before it’s heard in another committee or on second reading.

Once the bill passes second reading, all of the adopted amendments are enrolled into the bill. At that point, you should read the engrossed bill – also available on the bill page. But note: The printed and the electronic version of the bill summary is still not changed. The same is true of the reengrossed version of the bill, created after the bill passes on third reading in the first house. As with the preamended versions, changes made by the House are shaded; changes made by the Senate are double-underlined.

So, is the bill summary ever updated? Yes—but never on the bill itself. 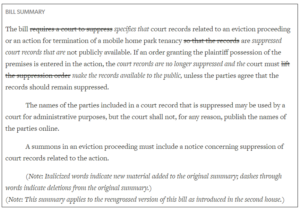 Before considering a bill in the second house, you should check the summary on the bill’s webpage to see how the first house changed the bill. If the online bill summary does not show any language in italics or strike type, then the first house did not significantly amend the bill.

After the legislative session ends, the bill drafters prepare a final summary for each bill that the General Assembly enacts. The final summary is posted to the bill’s webpage with this note: (Note: This summary applies to this bill as enacted.) The OLLS also collects these final bill summaries and annually publishes them in paper copy and online as the digest of bills for each legislative session.

Previous Post: Do You Really Need to Say “But Not Limited To”?
Next Post: The Statutory Revision Committee