“A member who has a personal or private interest in any measure or bill proposed or pending before the general assembly, shall disclose the fact to the house of which he is a member, and shall not vote thereon.” Article V, section 43 of the Colorado Constitution, effective August 1, 1876.

Legislative ethics principles have been included in the state’s constitution and been an integral part of legislative proceedings from the earliest days of statehood. The legislature expanded on these ethical principles and codified the standard of conduct expected for all persons involved with government in House Bill 88-1209. The ethical principles specific to the General Assembly listed in the bill and now codified as section 24-18-107, C.R.S., provide guidance to legislators when determining whether a conflict of interest exists and instructions on disclosing such an interest according to the applicable chamber’s rules.  It also states that a failure to disclose does not constitute a breach of the public trust of legislative office. 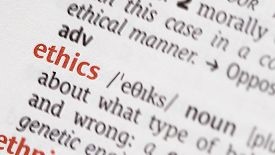 According to Joint Rule 42, a legislator is considered to have a personal, private, or financial interest in a pending bill, measure, or question if the passage or failure of the legislation will result in the legislator deriving a direct financial or pecuniary benefit that is greater than any benefit derived by or shared by other persons in the legislator’s profession, occupation, industry, or region. Joint Rule 42, like section 24-18-107, C.R.S., provides that a legislator is not considered to have such an interest in legislation if the interest arises from legislation affecting the entire membership of a class to which the legislator belongs. House Rule 21(c), and Senate Rules 17(c) and 41 discuss voting, disclosing, and excusing oneself from a vote.

Seems easy enough. Here are some hypothetical situations for your consideration:

Situation #1. The General Assembly is considering a bill that would provide comprehensive state assistance to promote biotechnological research within the state as well as related commercial applications. The assistance includes tax benefits, the establishment of a special state fund, and a new grant program. You are a member of the General Assembly and your spouse is a well-known and well-recognized research scientist who heads a special institute for biotechnological research at one of our state’s leading research universities. The bill would direct state financial assistance to a variety of public and private entities, but significant resources would be particularly directed to the institute headed by your spouse. It is likely the benefits from the bill would increase the institute’s budget and your spouse’s national profile and income.

May you vote on the legislation?

The correct answer is 4. Under Joint Rule 42, the relevant inquiry is whether you, as a member, will benefit from or be disadvantaged by the legislation more than any other member of your profession, occupation, industry, or region. Because of the special position your spouse holds and the extra benefits that the bill directs to the institute generally and to your spouse more specifically, there is a reasonable likelihood that your immediate household will benefit from the legislation more than others in your profession, occupation, industry, or region. This gives you a personal, private, or financial interest in the legislation necessitating your abstention from voting on the bill.

Situation #2. You are the owner of several apartment buildings and other rental properties in your community. A bill has been introduced that would lengthen the period of time available to a tenant to pay past-due rent.

May you vote on the legislation?

Previous Post: One Thing’s for Certain – Things are Uncertain
Next Post: The Four Ws and One H of Reconsideration of a Previous Vote