In a landmark ruling issued on June 26, 2015, the United States Supreme Court ruled in Obergefell v. Hodges (pronounced “OH-ber-guh-fell”) that the right to marry is a fundamental right under the U.S. Constitution. In a 5-4 decision, written by Justice Anthony Kennedy, the Court held that:

Justice Kennedy based the majority opinion on four principles: 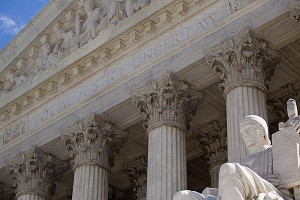 Having found marriage to be a fundamental right, the Court next considered whether the challenged law unconstitutionally infringes on this right. The Court concluded that state laws preventing same-sex marriage are unjustified infringements on the fundamental right to marry under the due process and equal protection clauses of the 14th amendment to the U.S. Constitution.

In its opinion, the Court reviewed the history of marriage, noting that “after years of litigation, legislation, referenda, and the discussions that attended these public acts, the States are now divided on the issue of same-sex marriage.” The majority rejected the dissent’s argument that sufficient debate had not occurred in the country to make this decision at this time. Justice Kennedy wrote, “Individuals need not await legislative action before asserting a fundamental right.”

As a result of this decision, every state statute or state constitutional provision that bans same sex-marriage is now invalid.

The Rise and Fall of DOMA Laws

As Justice Kennedy noted, the public debate about same-sex marriage laws has been on-going in this country for the last two decades. In 1993, the Hawaii Supreme Court ruled that a law denying same-sex couples the right to marry violated the state’s constitutional equal protection guarantees unless the state could show a “compelling reason” for this discrimination. After the Hawaii decision raised the possibility that states would start recognizing same-sex marriage, several state legislatures adopted statutes or amended their constitutions to define marriage as a relationship that could only exist between a man and a woman. These laws are referred to as “Defense of Marriage Acts” or “DOMA.” Congress enacted a federal DOMA law in 1996, which limited the availability of over 1000 federal benefits to only those marriages that consist of a relationship between one man and one woman as husband and wife. According to the National Conference of State Legislatures, by the end of 2000, 40 states had either adopted a DOMA-type statute or constitutional provision or both. Colorado adopted its DOMA statute in 2000, and Colorado voters approved a DOMA constitutional provision in 2006.

However, in the last ten years, opinions about same-sex marriage have been changing. Eleven states and the District of Columbia have now enacted legislation authorizing same-sex marriage. On June 26, 2013, the U.S. Supreme Court struck down the federal DOMA law in U.S. v. Windsor holding that the restrictions on federal benefits violated equal protection and due process for same-sex couples who were legally married in a state that 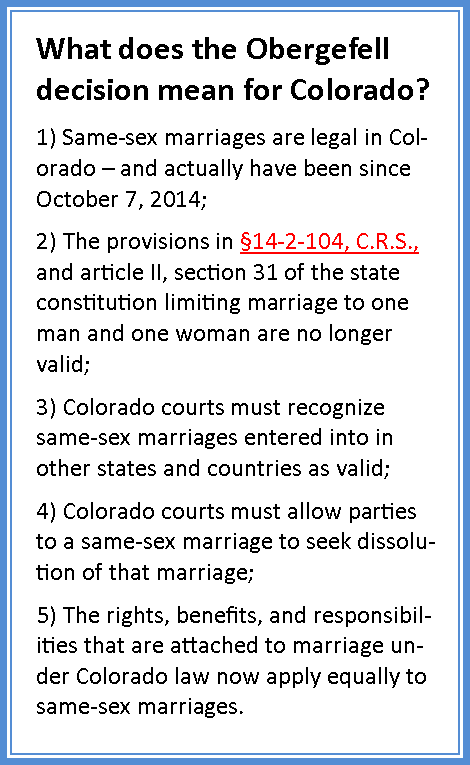 Meanwhile, the Sixth Circuit Court of Appeals upheld DOMA laws from Kentucky, Michigan, Ohio, and Tennessee, creating a split among the circuits in the country. Often when there is a circuit split, the U.S. Supreme Court will grant certiorari to resolve the matter, as it did in Obergefell.