Do you ever feel like things during the legislative session are just going too fast and that certain bills and topics need much more in-depth study time than they can get during the legislative session? Well, there’s an “app” for that – so to speak. It’s called a legislative interim study committee or an “interim committee”. When a legislator has a specific topic that he or she feels deserves time for in-depth study and testimony from a variety of experts in the field, the legislator may introduce a bill or joint resolution to create an interim committee. 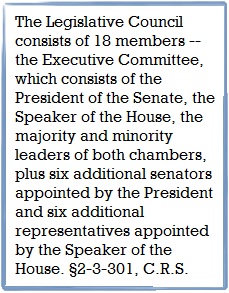 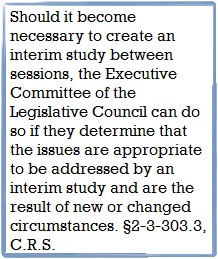 The number of committee meetings is usually limited to six, but the bill or joint resolution that creates the interim study committee may specify a different number of meetings. All travel expenses are subject to the Executive Committee’s approval before any travel occurs.

In addition to listening to committee meetings online, members of the public will find links to committee schedules, agendas, and meeting summaries on the committees portion of the General Assembly web site. The posted agendas include reports, presentations, and other items that the interim study committee will hear and discuss. Most interim committees meet in the State Capitol building, but an interim committee may travel to other cities and towns so long as travel is within the limitations of the committee’s budget and the Executive Committee approves the travel expenses.

What if an interim committee isn’t approved?
Legislators do not need a bill or a joint resolution to be able to study an issue in depth; they can bring interested parties or “stakeholders” together during the interim to discuss issues without creating an interim study committee. Legislators can reserve committee rooms in the Capitol to meet with stakeholders, discuss issues, and develop legislation for the upcoming session. Legislators can also request that a drafter attend a meeting at which they plan to discuss potential legislation. But, the legislators cannot claim a per diem for these meetings, and if a legislator introduces a bill that arises from these meetings, the bill will count against the legislator’s 5-bill limit. 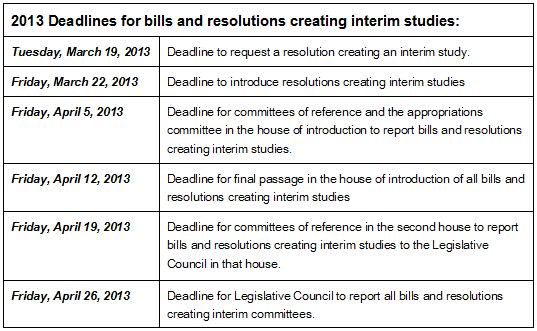 Previous Post: Let the Sun Shine In! Open Meetings Help Ensure Transparency in State Government
Next Post: Tax Check-off Programs — “Check it out, check it off!”