Thirty-six years ago, Colorado became the first state in the country to allow a taxpayer to “check-off” a voluntary contribution to a state program. That’s right — the Colorado Nongame and Endangered Wildlife Fund became, in 1977, the first state income tax check-off fund in the United States. Today, across the country and in nearly every state, there are hundreds of check-off funds. Colorado was also the first state to have a collaborative, statewide public awareness campaign — Checkoff Colorado — supported by all of the nonprofit programs that are included on the state income tax form.

Background
Every year, taxpayers contribute tens of millions of dollars to a diverse range of programs. Nationwide, the most common funds support wildlife preservation, political campaigns, child abuse and neglect prevention, and U.S. Olympic committees. Why is check-off giving so popular?  In a recent survey commissioned by Checkoff Colorado, participants indicated that one of the most important factors in their charitable decisions is knowing that they are giving to credible organizations. “Check-off funds” in most states are created by legislatures and are usually subject to periodic review.

The use of check-off boxes on income tax returns to fund organizations began in 1972 when the federal government allowed taxpayers to designate $1 of their tax liability to a special presidential campaign fund.  States soon followed with their own check-off programs and in the past 35 years these programs have ballooned in scope and popularity. 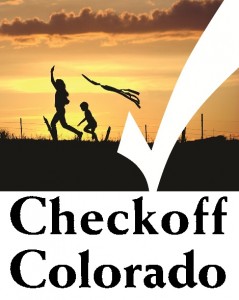 State check-off programs differ from the federal program in two ways. First, states generally allow more options — permitting donations to several charitable and social programs.  Second, most state check-offs reduce the taxpayer’s refund rather than redirect a portion of tax liability. Many states limit the donation to the size of the refund, while some states, like Colorado, permit taxpayers to increase their payment to cover any additional check-off donations.

In Colorado, a total of 29 different organizations have raised nearly $40 million in donations through check-off funds since that first fund in 1977. The 15 income tax check-offs listed on the 2010 individual state income tax return received nearly 150,000 donations for a total of $1.6 million.

Current and newly created programs and the “queue”
Currently, 15 checkoff programs appear on the state income tax return form, which is the maximum allowed by law.  However, more than 20 checkoffs exist (and legislation to create new checkoffs is introduced each session). To ensure that the 20-checkoff cap is not exceeded, the legislature established a priority order for newly created check-offs through House Bill 11-1295. The priority order system specifies that continued or renewed programs take precedence over newly created programs. Thus, if a program that has appeared on the form is renewed or continued and receives donations totaling at least $75,000, the program remains on the form in the next tax year. Generally, a checkoff that has been on the form for at least three years and that fails to meet the $75,000 threshold is immediately removed from the form. (A checkoff program may also be removed from the form when the legislature decides to allow it to expire in accordance with its statutory “sunset”, or repeal, date.)

Newly created programs can only appear on the tax form if they are first in the queue when an existing program is removed. If more than one program is in the queue, the order of programs is determined by the date and time that the Governor signs the bill creating the new program. A checkoff that appears on the form for the first time has three years to “ramp up” to the $75,000 threshold, but must hit that amount in the third and every succeeding year.

Summary: Check-offs in Colorado
1.    The number of programs allowed to participate is limited to 20.
2.    After the ramp-up period, programs must generate a minimum amount of donations to remain on the check-off form. The total annual amount contributed to a check-off must be at least $50,000 (beginning with the third income tax year in which the program appears on the Colorado income tax form).
3.    Programs are reviewed periodically to determine whether they have met the statutorily established requirements.

Previous Post: To Really Drill Down on an Issue, Consider Creating an Interim Study Committee
Next Post: A New Interpretation of “Amendment 41” and Gifts of Travel: Maybe You Can Attend that Conference!