Our state capitol is bursting with wonderful architectural nuance, and some of it is not readily apparent as one wanders the halls or the grounds. In fact, I discovered the pediment statuary above the House chamber windows, on the building’s west side, completely by accident. I was standing out there in a crowd of people, waiting for a fancy jet fly-by that was due to happen, and it just caught my eye. It’s fascinating to me how much detail is there, despite the sculptor’s understanding that very few people would ever have a clear view of it. Squinting to see the shapes and forms, I wondered what they represented. 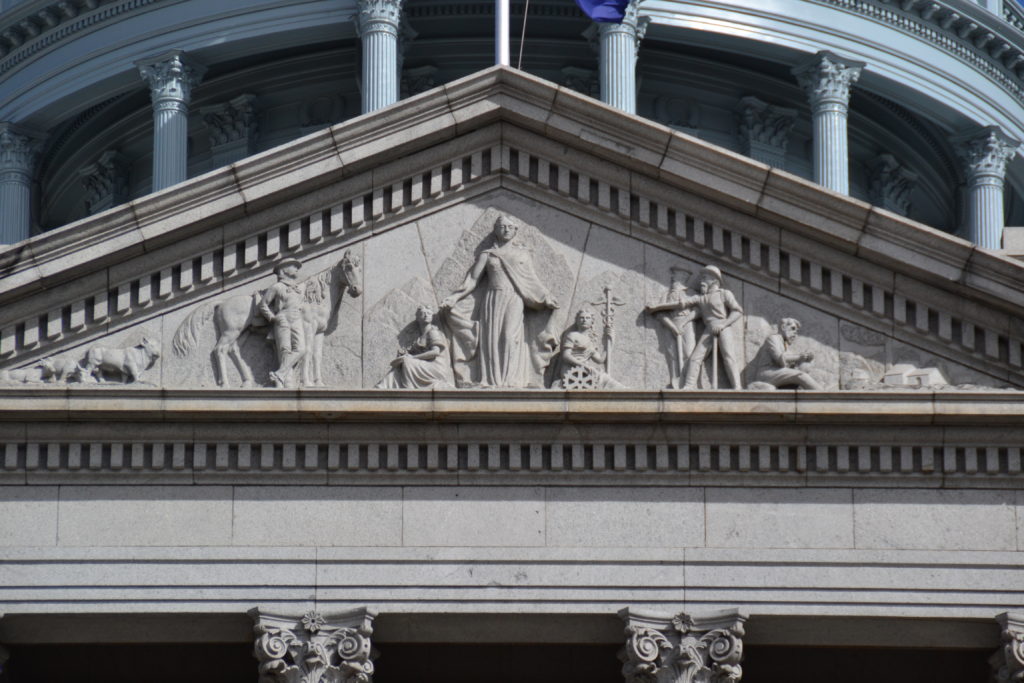 Dr. Derek Everett, former capitol tour guide and author of “The Colorado State Capitol: History, Politics, Preservation,” provided the following information via email about the pediment and the accompanying photo.

“The pediment statuary was originally designed, as with every other element of the building from floor plans to banister posts, by architect Elijah E. Myers, who’d already won commissions for the capitols in Michigan and Texas. He produced an extensive, complicated description for his vision of an appropriate collection of statuary reflecting Colorado’s experience to the Board of Capitol Managers (BoCM), the body responsible for erecting the building. Here’s his vision from an undated letter, but likely written between 1886-88:
‘On the extreme right of the sketch is represented the prairie schooner drawn by oxen, representing emigrants coming to the new Territory, while in the roadway partly concealed behind the rocks is the skulking indians [sic] evidently bent on his deadly intent to prevent the advance of civilization. As the emigrants proceeds [sic] on their way he meets the happy greetings of plenty with the outstretched cornucopia. She conveys to him that here is a new home that by his industry and skill that the land will produce for him and his family his horses and cattle abundance, and in obedience to the law greets him with a hearty welcome to the settlement. The next figure is a representation of a statue recording the law of the people, representing legislation, with the open tablet in her hands conveys to him the rights and priviledges [sic] under the law he has granted to him in the protection of himself his family and his property. The centre [sic] figure represents Justice the right hand resting on the book of law, at the left of this statue is the globe, representing the universality of law and benefits of civilization and law affords, the protection of property. On the left of the centre [sic] figure is represented the Mechanical arts. And still further to the left is a representation of the happy home.’
As you can imagine, the cost and complication of creating something so intricate, especially since it would be so crowded and small up in the pediment that few people would be able to appreciate it, dissuaded the BoCM from carrying it out. By 1889, Myers had left the project anyway, and the board made their own call. In September 1890, a few months after the cornerstone ceremony and at a point where little more than the first floor granite walls and the sandstone rotunda core were in place, the BoCM viewed a plaster model of the pioneer family pediment statuary based upon Myers’ work. They revised and simplified it dramatically, and worked with California sculptor Ludwig Oehlmann to make a new plaster model and ultimately carve the sculpture they approved. It consists of a figure representing Columbia (an allegorical stand-in for the United States popular at the time) flanked by figures representing agriculture and mining/commerce. The simplified work was carved early in the 1890s and installed no later than 1892, by which time the granite walls of the building were complete.”

What’s your favorite thing about the capitol building? Let us know on Twitter @LegiSource.