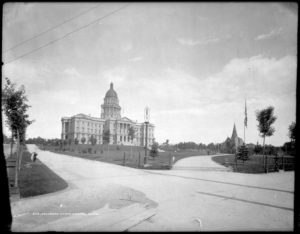 On January 2, 1895, the Colorado General Assembly met in its new statehouse for the first time. Outgoing governor Davis Waite had moved into the building two months earlier, but work on the Capitol would not be complete for 13 more years. Imagine the deafening din of hammers and trowels while trying to debate on the chamber floors. Just getting here from far flung Trinidad, Leadville, or Ouray would have been a feat.

The House of Representatives convened at noon and was called to order by Chief Clerk of the Ninth General Assembly John R. Wallingford followed by a prayer by Prof. T.N. Haskell. Among the day’s business was nominating a clerk pro tempore, and the body unanimously voted for Wallingford. Mr. A. Humphrey of El Paso County received a majority of votes to become Speaker of the House.

Truth be told, much about the process of offering, debating, and voting on legislation remains the same as it did 125 years ago. Here are three notable bills passed by the 10th General Assembly that reflect Colorado citizens’ interests and concerns of the day. 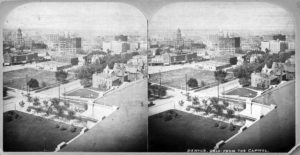 H.B. 19 – Mayhem (Rep. Morris)
In this somewhat terrifying bill, mayhem was defined as unlawfully depriving a human being of a member of his or her body or disfiguring or rendering it useless. The bill stated that any person who unlawfully cut out or disabled the tongue, put out an eye, slit the nose, ear, or lip, or disabled any limb or member of another, or voluntarily and of purpose put out an eye or eyes, was guilty of mayhem, and on conviction would be punished by confinement in the penitentiary for a term not less than one year nor more than 20 years. Naturally, there’s an exception: No person would be found guilty of mayhem if it occurred during a consensual fight, nor unless it appeared that the person accused was the assailant, or that the party maimed had in good faith endeavored to decline further combat.

Much history has been made at the Colorado Capitol over these 125 years. The will of the people, through their elected representatives, is imposed here today just as it was on Jan. 2, 1895. Let us be grateful for and humbled by this legacy of democracy in action.

All photos courtesy of the Denver Public Library.

Previous Post: Happy Holidays from the OLLS
Next Post: C.R.S. Books vs. C.R.S. Online: Why Aren’t They the Same?