Toward the end of the 19th century, some farmers moved to an area in the eastern plains of Colorado then known as the “the rain belt region.” The name was a bit optimistic. Due to a drought, the farmers lost their crops. The General Assembly passed a relief act, which provided for the purchase of seeds and grain for the farmers. Attorney General Byron Rogers was concerned that the act violated section 34 of article V of the Constitution of Colorado.

So the attorney general asked Governor Albert McIntire to submit interrogatories to the Colorado Supreme Court. In a case titled In re Relief Bills, the court held that:

Toward the end of the 20th century, Governor Roy Romer called a special session to pass legislation creating incentives for airlines to place operations in Colorado—specifically, United Airlines was considering placing a maintenance facility in Colorado. The General Assembly passed an incentive act, which provided for building airport facilities to accommodate United’s planned expansion. The governor was concerned that the bill might violate section 34.

So the governor submitted interrogatories to the Colorado Supreme Court. In a case titled In re Interrogatory Propounded by Governor Roy Romer on House Bill 91S-1005, the court held: “We conclude that, on its face, [the act] does not violate article V, section 34.”

What a difference a century makes! Let’s look at the language of section 34:

Section 34. Appropriations to private institutions forbidden. No appropriation shall be made for charitable, industrial, educational or benevolent purposes to any person, corporation or community not under the absolute control of the state, nor to any denominational or sectarian institution or association.

Both acts made appropriations. Both acts apply to the forbidden categories: charitable, industrial, educational or benevolent. The first act was for charitable and benevolent purposes; the second act was for industrial and benevolent purposes. Both acts spent the money for a covered entity: a person, corporation, or community. And finally, neither farmers nor airlines are under the absolute control of the state. So far, the two cases both fall under section 34.

I’ll bet I know what some of you are thinking: Neither of these cases falls under section 34 because in both cases, the appropriation was made for, not to, the farmers and the airline. The words to and for don’t mean the same thing. Therefore, an appropriation must be made to state agencies, and then the state agencies may spend the money for charitable, industrial, educational, or benevolent purposes. This narrow reading is procedural rather than substantive. The Colorado Supreme Court, however, has not adopted the narrow procedural reading. In 1895, the court struck down the farmer’s relief act, which didn’t actually appropriate the money to the farmers. And although the court upheld the airlines incentive act, the court didn’t uphold the act by distinguishing between the words to and for. Instead, the court’s holding is based on the public purpose doctrine:

[T]he legislation must evince a discrete and particularized public purpose which, when measured against the proscription of Article V, Section 34, preponderates over any individual interests incidentally served by the statutory program. 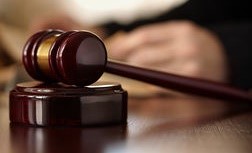 smaller group. Of course, the second case’s appropriation was made to help the small group of airline companies. The act, however, helpfully explains that the “health, safety, and welfare of the people of this state are dependent upon the continued encouragement, development, and expansion of opportunities for employment in the private sector….” In other words, an airline placing an operation within Colorado would bring jobs. Specifically, the act requires the new operation to employ 3,000 people with an average salary of at least $45,000. That many jobs would increase tax revenue, lower social welfare spending, have social benefits, etc. Therefore, the public purpose of more jobs outweighs the private interests of helping an airline.

A case can be made that the farmer-relief act wasn’t only charity. It gave the farmers the seeds and grains they needed to grow more food. Everyone in Colorado eats food, so the public would benefit from a greater supply of food. And because farmers grow food from seeds and grain, farmers can’t do the job of farming without seeds or grain. So giving seeds and grain to farmers is an inexpensive way to increase jobs. If more jobs justify helping out an airline, why wouldn’t more jobs and more food justify helping out farmers? Did the act’s proponents fail to argue the case well? Did the court decide that, in this case, the private purpose outweighed the public purpose?

No. The court didn’t decide the farmer­-relief case based on the public purpose doctrine. The court didn’t rest its holding on the basis of the act’s private purpose. The court simply held that the “state cannot … extend aid for charitable, industrial, educational or benevolent purposes to any person….” It was a blanket substantive prohibition.

In two weeks, I’ll explain what happened between these two cases.

Previous Post: Federal Law as Law of the Land: Federal Preemption
Next Post: The Domino Effect of a Delayed Adjournment Sine Die