Editor’s Note: Currently, there are four statutory committees whose duties include overseeing the operations of four of the legislative staff agencies. It appears that the General Assembly created each of these committees with the goal of increasing the effectiveness of the General Assembly, improving its ability to pass well-considered legislation, and improving its ability to provide independent oversight of the use of public money.

Over the next four weeks, we will look at each of these committees – the Legislative Council, the Audit Committee, the Committee on Legal Services, and the Joint Budget Committee – why they were created, how they operate, and their current duties.

Colorado’s Legislative Council was statutorily created in the 1953 legislative session. At the time, legislatures usually met for much shorter sessions than they do today, which caused some legislators to feel that the body wasn’t functioning as well as it should or that its role was being usurped by governors while they were not in session. Echoing the sentiment of other state legislatures of the time, Colorado’s Legislative Council was seen as a means to help legislators address problems that would otherwise not be seeing legislative solutions. The Council was designed to meet during the legislative interim to study issues of interest and provide policy recommendations to the General Assembly.

When it created the Legislative Council, the General Assembly immediately realized that it would need staff support. The first Legislative Council staff director came and went so fast that his name has all but been erased, but the second director, Shelby Harper, started in November 1953. With a single assistant and a $12,000 appropriation, the work of serving legislators began. Harper moved on to another career pursuit in the winter of 1957 and was succeeded by Lyle Kyle, who served as director until 1985. In the 1967 legislative session, the Legislative Council staff was comprised of enough people to staff, for the first time, the three busiest committees in each house: Judiciary, State Affairs, and Business Affairs.

One of four statutory legislative committees that oversee legislative staff agencies, the Council is a joint standing committee, created in section 2-3-301 of the Colorado Revised Statutes. Section 2-3-301 (1), C.R.S., reads in part: 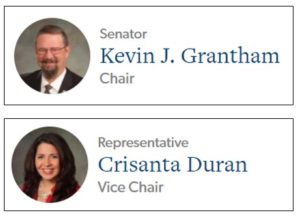 The remaining members of the Council are appointed no later than 10 days after the first regular session of each General Assembly convenes. Membership on the Council terminates with the appointment of a member’s successor or upon the termination of a member’s term of office in the General Assembly, whichever occurs first. A member may be appointed to succeed himself or herself.

In 2016, Senate Bill 16-156 changed the authority of the President, the Speaker, and the minority leaders to make temporary appointments. Now, any of these appointing authorities may temporarily appoint a member to replace a current committee member without the approval of a majority of the members elected to the applicable body.

The Legislative Council is scheduled to meet at 10 a.m. on November 15 in Committee Room 271 at the Colorado State Capitol to review interim committee legislation. At the time of this posting, the agenda has not been released.

Previous Post: What’s so Special about a Special Session?
Next Post: Audit Committee Created to Boost Oversight of Public Money