Traditionally, a legislative session in Colorado commences on the second Wednesday in January — but it can start sooner. The convening date and other important Colorado legislative timelines are specified in the state’s Constitution.  The provision determining when the legislative session annually convenes is in section 7 of article V of the state constitution. It requires the General Assembly to meet in regular session at 10 a.m. “no later than the 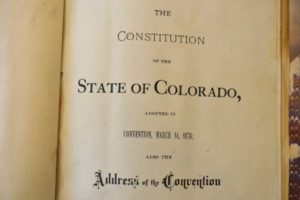 Although a January 4th starting date may cut the holiday season a little shorter this year for some of us, it could be worse. The convening date could have been January 1 — like it was a hundred years ago for the 1919 Legislative Session!