[Editor’s note: We originally posted this article on October 3, 2013. Since that time, the Florida law has been amended. This reposting is an update to the original article.]

No, Colorado does not have a “Stand Your Ground” law. We have a “Make My Day” law.

Florida’s “Stand Your Ground” law (Fla. Stat. 776.013), which has attracted much attention in the past, reads:

(1) A person who is in a dwelling or residence in which the person has a right to be has no duty to retreat and has the right to stand his or her ground and use or threaten to use: (. . .)

(b) Deadly force if he or she reasonably believes that using or threatening to use such force is necessary to prevent imminent death or great bodily harm to himself or herself or another or to prevent the imminent commission of a forcible felony.

(a) The person against whom the defensive force was used or threatened was in the process of unlawfully and forcefully entering, or had unlawfully and forcibly entered, a dwelling, residence, or occupied vehicle, or if that person had removed or was attempting to remove another against that person’s will from the dwelling, residence, or occupied vehicle; and

This presumption eliminates the burden of proof for a person who used deadly force—that is, the burden to prove that he or she had a “reasonable fear of imminent peril of death or great bodily harm.” The presumption shifts the burden to the prosecution, who must prove otherwise.

Florida adopted its “Stand Your Ground” law in 2005 and amended it in 2014 and 2017. Since then, according to the National Conference of State Legislatures, the number of states with similar laws has grown to 22.

Colorado adopted its “Make My Day” law in 1985. At that time, the phrase “make my day” had been popularized by the 1983 Clint Eastwood film Sudden Impact and then revived by President Reagan in his 1985 threat to veto any tax increase legislation sent to him by the U.S. Congress. The law is codified at section 18-1-704.5, C.R.S.

The very idea of a statutory “castle doctrine” in Colorado is a little strange because the castle doctrine, by its own terms, is an exception to another doctrine—the duty to retreat. And except in certain specific circumstances, there has never been a duty to retreat in Colorado. (See People v. Toler, 9 P.3d 341, 348 (Colo. 2000), citing Boykin v. People, 45 P. 419 (Colo. 1896).) It is therefore no surprise that Colorado’s “Make My Day” law does not mention a duty to retreat; it has never been necessary for the General Assembly to state explicitly that no such duty exists in Colorado.

The “Make My Day” law is like the “castle doctrine” because it is limited to dwellings. Rather than stating that there is no duty to retreat in a dwelling, however, Colorado’s law lowers the standard for justifying the use of deadly force against an intruder in a dwelling.

Under Colorado’s law, any occupant of a dwelling may use deadly force against an intruder when the occupant reasonably believes the intruder (1) has committed or intends to commit a crime in the dwelling in addition to the uninvited entry and (2) might use any physical force, no matter how slight, against any occupant of the dwelling. This is a lower standard of justification than appears, for example, in Colorado’s historical self-defense statute, which is codified at section 18-1-704, C.R.S. 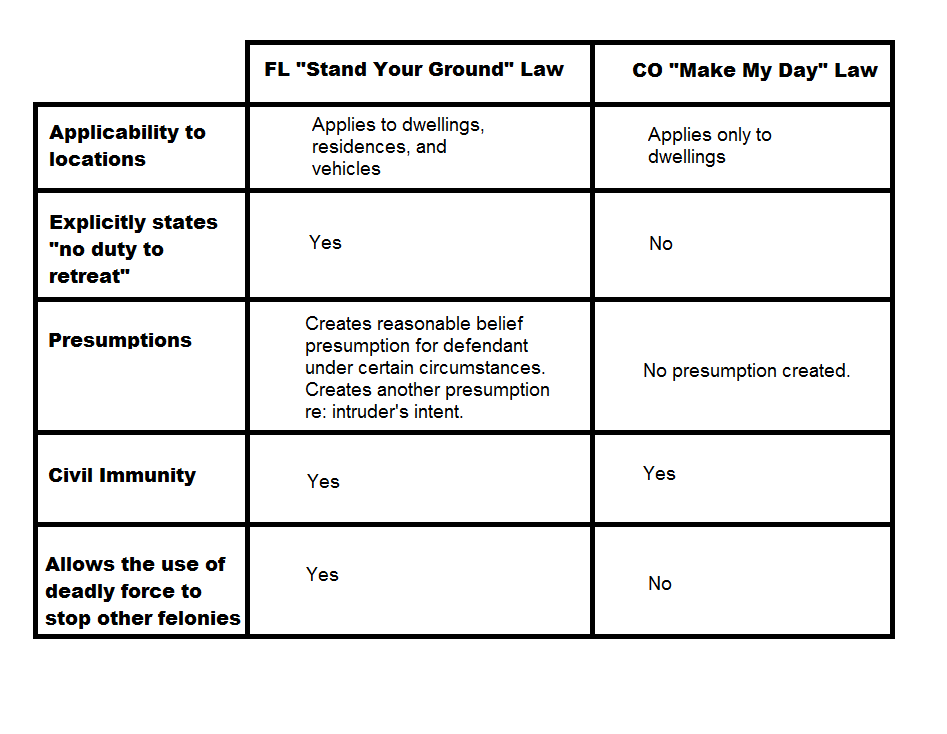 Previous Post: Just Outside Our Doors – A Tribute to Colorado’s Pioneers and Pioneer Spirit
Next Post: The Office of Legislative Legal Services: More Than Just Bill and Amendment Drafting