Editor’s Note: Last September, LegiSource began a series of articles focusing on statutory construction. This week’s article is the fourth in the series. For the earlier articles, see postings on Sept. 12, 2013, and July 31 and August 21, 2014.

Continuing our exploration of the General Assembly’s clarifications of certain words and phrases, this week we look at (1) how many members it takes for a public body to act; (2) what happens when the numbers say one thing, but the words say another; (3) what does “to” really mean; and (4) what it means when a drafter refers to the “introductory portion” of a statute.

Many sections of statute create boards, commissions, task forces, advisory boards, or some other group of people who make policy decisions or recommendations. The statute that creates a policy group seldom specifies the minimum number of members that must be present for the body to take action and how many of them must agree for the action to be valid. 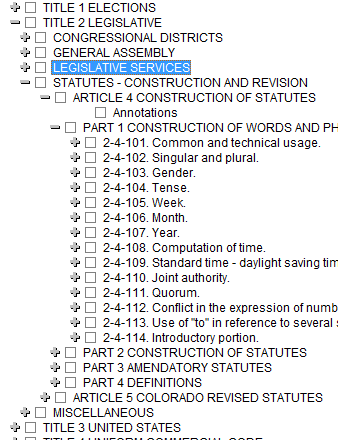 majority of the members of the body, as set in the statute. And if the body consists of three or more persons, a majority of the total number of members — not just a majority of a quorum — must agree for the body to exercise its authority. But if the statute that creates the policy group specifies a different number of members for a quorum or for the group to exercise its authority, the specific number will override §§2-4-110 and 2-4-111, C.R.S.

The House of Representative and Senate don’t follow these sections. House Rule 25 (i) (1) and (j) (10) and Senate Rule 22 (b) and (n) require a majority of the members of a legislative committee for a quorum, and the agreement of a majority of a quorum or a majority of those present and voting, whichever is greater, is necessary to take action on legislation. So for a nine-member committee, at least five members must be present for the committee to take any action. And if only five members are present, the action can be approved by the affirmative vote of three members. But if all nine members are present, the action must be approved by the affirmative vote of at least five members.

A statute will sometimes include a number, and it may express the number both in numerals and in words. If the numeral is different from the word, §2-4-112, C.R.S., says that the word will govern. This provision also applies to nonstatutory portions of a bill such as appropriations clauses.

Often, a statute will make a cross-reference to other statutory sections as follows: “section xx-xxx-xxxx to section xx-xxx-xxxx.” This creates an ambiguity: Are one or both of the listed sections included in the cross reference? Or does it include just the sections between the two listed sections? Section 2-4-113, C.R.S., solves this dilemma. Whenever the statutes refer to several sections and the section numbers given in the reference are connected by the word “to,” the reference includes both of the sections whose numbers are given and all intervening sections.

You will sometimes hear a bill drafter refer to the “introductory portion” of a statute, and you may wonder what she’s talking about. The drafter did not make up the term; it’s created in §2-4-114, C.R.S.:

The text that precedes the colon is the introductory portion to the section.
That’s it for statutory clarification of specific words and phrases. With the following articles in this series, we’ll look at part 2 of article 4 of title 2, C.R.S., which provides several rules or canons that courts apply when interpreting the statutes.