Last week, we discovered that teachers and professors must take an oath to uphold the federal and state constitutions and to faithfully perform their duties. Originally, however, they also had to swear to “teach … respect for the flags of the United States and of the State of Colorado, reverence for law and order and undivided allegiance to the government of one country, the United States of America.”

Several states adopted similar requirements generally starting in the 1920s and continuing into the 1950s. During this period, many people were concerned about the possibility of subversive elements within the government, including the public schools. By the 1960s, teachers and professors were concerned that taking these oaths violated their constitutional rights. So they started suing.

One of the first cases was Baggett v. Bullitt out of Washington. In 1931, the state of Washington passed a law requiring teachers to take an oath that was almost verbatim the same as the oath adopted in 1921 in Colorado. In the early 1960s, a group of faculty, staff, and students at the University of Washington sued, claiming the oath was unconstitutionally vague. Generally, courts have held that a law that forbids or requires conduct in terms so vague that persons of common intelligence have to guess what it means is unconstitutional because it violates due process. 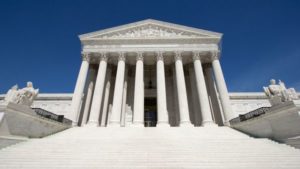 The plaintiffs lost at the trial court level, so Baggett v. Bullitt ended up in front of the U.S. Supreme Court in 1964 where the Court held that the oath was too vague. The Court recognized that there are many activities that could be interpreted as violating a promise to promote respect for the flag, including refusing to salute for religious reasons.

The Court also found that it would be difficult to predict what actions could be interpreted as violating a promise to “promote … undivided allegiance to the … United States of America.” The Court found that

It would not be unreasonable for the serious-minded oath taker to conclude that he should dispense with lectures voicing far-reaching criticism of any old or new policy followed by the Government of the United States. He could find it questionable under this language to ally himself with any interest group dedicated to opposing any current public policy or law of the Federal Government, for if he did, he might well be accused of placing loyalty to the group above allegiance to the United States.

Despite the Baggett decision, the Colorado statute remained on the books. Then in 1967, University of Colorado Professor Alan Gallagher refused to take the oath and sued the president of the university—Joseph Smiley— and the Board of Regents. Professor Gallagher claimed the oath violated his constitutional rights because it was vague and overly broad. The federal district court for Colorado agreed. They followed the Baggett decision and issued an injunction prohibiting CU from requiring its professors to take the statutory oath.

But before the court ruled, the CU Board of Regents in February of 1967 had adopted a resolution requiring CU professors to take a different oath:

Professor Gallagher’s case did not challenge the Board of Regents’ new oath, and the court did not consider whether it was constitutional. So, the court’s injunction prohibited CU from requiring the statutory oath, but faculty still had to take the Regents’ oath.

A few months later in the fall of 1967, a group of CU professors and employees, this time led by Professor Elizabeth Hosack, sued claiming the Regents’ oath was also unconstitutionally vague and that it violated their First Amendment rights to freedom of expression.

The United States District Court for the District of Colorado found that the Regents’ oath was not unconstitutionally vague, but “plain, straight-forward, and unequivocal. A person taking it is not left in doubt as to his undertaking. The obligation assumed is one of simple recognition that ours is a government of laws and not of men.”

The panel also found that the oath did not infringe on the professors’ and employees’ freedom of expression.

Recognition of and respect for law in no way prevents the right to dissent and question repugnant laws. Nor does it limit the right to seek through lawful means the repeal or amendment of state or federal laws with which the oath taker is in disagreement. Support for the constitutions and laws of the nation and state does not call for blind subservience.

This opinion came out in December of 1967, and in 1969 the General Assembly passed House Bill No. 1194, which changed the wording of the statutory oath to what we have today:

The statutory oath is similar to the Regents’ oath; the teacher or professor is promising to uphold the federal and state constitutions and to faithfully perform his or her duties. Further, there is no mention of respect for the flags, reverence for law and order, or undivided allegiance.

In the fall of 1969, a group of Denver Public School teachers and professors from several Colorado universities and colleges sued in federal court to prevent implementation of the new oath. Again, they were claiming that the oath was unconstitutionally vague and deprived them of their First Amendment rights. And again, the federal district court disagreed, upholding the statute as constitutional.

The three-judge panel followed the decision in the Hosack case, finding that there was nothing vague about promising to uphold the federal and state constitutions. The plaintiffs then claimed that the promise to faithfully perform their duties was too vague. The judges disagreed. “The state can reasonably ask teachers in state schools to subscribe to professional competence and dedication. This portion of the oath…imposes no restrictions on a teacher’s political expressions. It is certain that there is no right to be unfaithful in the performance of duties…. ”

At the end of its decision, the panel of judges admitted that they were puzzled as to why the plaintiffs found the taking of an oath so “obnoxious.” While the court understood that the plaintiffs felt that they didn’t know what they were promising and had reservations about what the significance of the oath was, the court refused to find these reservations as a basis for holding the oath invalid. “The decision as to [the] worth or value [of the oath] is for the legislature, and we are not prepared to say that it does not serve a purpose any more than we could say that the constitution itself is valueless.”

The loyalty oath for teachers and professors remains in the Colorado Revised Statutes. Presumably the General Assembly continues to find that it serves a purpose.