(A previous version of this article was posted on April 30, 2015, as “The Race is On to the End of the Session: Automatic Rule Changes Pick Up the Pace”.)

On May 4, legislators, legislative staff, lobbyists, and capitol reporters can all hit the snooze button and roll over for another hour of sleep. 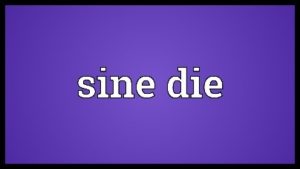 But between now and then, there are several amendments to read, bills to consider, and differences to resolve. To help ensure that both houses can complete their work by midnight on May 3, the legislative rules automatically speed up or suspend certain procedural requirements in the last few days of the session.

With these expedited procedures, bills will probably be moving quickly. If you find yourself wondering which bills passed and what they do, you’ll want to check the digest of bills. The Office of Legislative Legal Services (OLLS) annually publishes the digest, which contains a summary of each bill enacted during the legislative session, organized by subject matter. The OLLS will publish a preliminary digest by May 2 that will include all of the bills that have passed and been signed by the Governor or allowed to become law by that date. The OLLS will publish the final digest once the 30-day period for Governor action is passed. Copies of the preliminary and final digest will be available in Room 091 in the Capitol basement and posted on the OLLS website.