It’s a common sight in the capitol every year or so – school kids gleefully working with legislators to learn how a bill becomes a law and to make their own impact on the state by presenting a bill to designate a state symbol. This tradition goes back more than 100 years, to when the white and lavender Columbine flower became the state flower of Colorado.

Aquilegia caerulea, more commonly known as the Colorado Blue Columbine, was discovered in July 1820 on Pike’s Peak by Edwin James. Edwin James, a botanist, surgeon, linguist, and all-around Renaissance man, signed on to the Long Expedition, heading west from St. Louis, Missouri, after the first botanist who signed on for the expedition died. James is recognized as the first white man to reach the peak. (While the mountain is named after Zebulon Pike, Pike did not make it to the peak.) James described the flower as inhabiting “shady woods of pine and spruce within the mountains, rising sometimes to the height of three feet.” (Say, Long, et al., James’s Account, vol. 2 of 4)

The flower is a common sight in Colorado, growing in shades of red, yellow, and lavender, among other shades, with the strongest colors present in those flowers growing at higher elevations. In 1881, Colorado schoolchildren voted – 14,472 of 22,316 votes – to make the Columbine the state flower. Despite this spirited vote by the children, paperwork was never filed and, sadly, the flower seemed destined to remain a common mountain flower. (Netstate June 2013)

Eighteen years later, in 1899, a women’s club in Cripple Creek discovered the paperwork snafu and Senator Ammons, of future gubernatorial fame, put forward SB 261 declaring the white and lavender Columbine the state flower of Colorado. The bill was passed on April 4 and took effect immediately.

For many of the state’s symbols, this is the end of the road. But for the Columbine, the journey to historic status didn’t stop there. 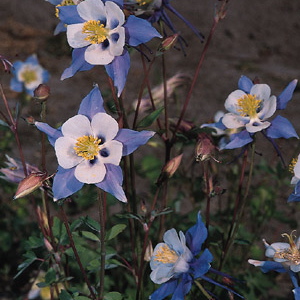 Twenty-six years after the initial passage of the state flower statute, Senators Fairfield, Toll, and Young, and Representative Tegarden amended the Columbine law to allow for the protection of the state flower (Session Laws of Colorado 1925). “It is hereby declared to be the duty of all citizens of this state to protect the white and lavender Columbine Aquilegia, Caerulea, the state flower, from needless destruction or waste.” (Section 24-80-906, C.R.S.) Section 24-80-907, C.R.S., goes even further, specifying that:

It is unlawful for any person to tear the state flower up by the roots when grown or growing upon any state, school, or other public lands or in any public highway or other public place or to pick or gather upon any such public lands or in any such public highway or place more than twenty-five stems, buds, or blossoms of such flower in any one day; and it is also unlawful for any person to pick or gather such flower upon private lands without the consent of the owner thereof first had or obtained.

In addition, any person who violates the protections set forth in section 24-80-907, C.R.S., is guilty of a misdemeanor offense, punishable by a fine of up to $50.

While the Columbine flower is not the only state symbol under protection, it is certainly fair to say that the flower has had a very interesting and long road to becoming the famous symbol it is today. The flower was immortalized in song by A.J. Fynn, in “Where the Columbines Grow,” which was designated the state song in 1915:

For more information on state symbols and emblems, visit the Colorado Department of Personnel and Administration website here.