It’s Spring and for the Colorado General Assembly that means just one thing: The annual Long Appropriations Bill or “Long Bill” is due to be introduced. Introduction—and passage—of the Long Bill completes an extensive and collaborative effort on the part of legislators, legislative staff, executive branch departments, and the governor’s office to pass a balanced budget for the citizens of Colorado.

Each year, Colorado’s budget process begins long before the legislative session convenes. In the early fall, the executive branch departments submit budget proposals to the Governor’s Office of State Planning and Budgeting (OSPB). The OSPB reviews the proposals and makes adjustments based on the governor’s priorities and the anticipated amount of money available.

Executive departments then submit the approved budget requests to the General Assembly’s Joint Budget Committee (JBC) by November 1. The judicial department also submits its budget requests at this time. The JBC staff review these requests and prepare written briefings and oral presentations to the JBC. Starting in November, the JBC schedules hearings with each department to discuss department budget priorities, operations, effectiveness, and future planning.

All JBC budget briefings, hearings, and other meetings are open to the public, broadcast over the internet, and recorded and archived. The JBC does not accept public testimony during budget hearings, but they may allow public testimony in other hearings. 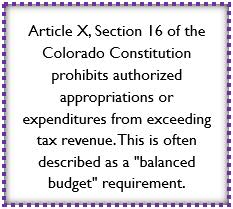 needed to facilitate the Long Bill. Departments often ask the JBC to reconsider its actions regarding specific budget decisions. Throughout the first half of the legislative session, the JBC meets almost daily to review, adjust, and reset legislative department budget line items.

Economic forecasts and other reports, department budget requests, and budget recommendations from the governor’s office help the JBC and its staff develop a “balanced budget” proposal, which includes the Long Bill and legislation included with the Long Bill, as well as bills introduced by other legislators. For more background on the JBC and Colorado’s budget process, please see “Joint Budget Committee to Write State’s Budget for the 58th Time”, posted October 26, 2017.

Introduction of the Long Bill alternates between the House of Representatives, in even years, and the Senate, in odd years. The bill is typically 300+ pages and often the JBC introduces several additional bills as part of a “long bill budget package.” This is necessary because, under the state constitution, the Long Bill can only include appropriations; it cannot include substantive changes to the statutes. So, if the JBC makes budgeting decisions that require a change to the statute, they have to introduce a separate bill to accomplish that change. For example, if the JBC decides to appropriate a certain amount for a program, but wants to improve the efficiency with which the money is distributed, the committee will introduce a bill to change the statutory distribution method.

Once the Long Bill and any associated bills are introduced, all work in that chamber revolves around passing those bills. Committee of reference meetings and other floor work is minimized so that the parties can meet in their caucuses to listen to JBC presentations on the Long Bill, ask questions, and discuss amendments to the bill. It usually takes about one week for the Long Bill and its associated bills to pass each chamber. Because the second chamber almost always amends the Long Bill, a third week is required for a conference committee, which is traditionally the JBC members, to meet and recommend a report that resolves the differences between the two chambers. Each chamber must then adopt the report and readopt the final version of the bill.

Once the Long Bill passes both chambers, the funding for existing programs and services is finalized and the General Assembly knows how much money is available for bills to create new programs or offer additional services. The House and Senate appropriations committees start meeting in earnest to pass or postpone indefinitely all of these bills, many of which have been languishing in those committees awaiting passage of the Long Bill. The General Assembly typically tries to ensure that the total amount appropriated through the Long Bill and all enacted bills that fund new programs or services does not exceed the amount of revenue that the state is expecting to have available in the coming fiscal year.

For a more comprehensive and detailed explanation of Colorado’s budget process, please visit the Joint Budget Committee Staff homepage to review their information on the budget process and budget documents.

During the 2018 Legislative Session, the Long Appropriations Bill is scheduled to be introduced in the House of Representatives on Monday, March 26, 2018. The deadline for the Long Bill to pass both houses is Friday, April 6, 2018, and the deadline for adoption of the conference committee report and final passage of the Long Bill is April 13, 2018.

Previous Post: The 411 on Executive Session under the Colorado Open Meetings Law
Next Post: Conference Committees: A Quick Review of the Options