In a case that began in Georgia in 2017, the U.S. Supreme Court concluded last Monday that copyright protection for original works of authorship does not extend to the annotations included in Georgia’s official annotated code.

As background, the State of Georgia sued Public.resource.org (PRO) after PRO purchased a copy of the Official Code of Georgia Annotated (OCGA) and posted it online in its entirety. The District Court for the Northern District of Georgia determined that the Georgia statutory annotations were, in fact, original works entitled to broad copyright protection.

However, PRO, an organization whose mission is to increase access to government materials, appealed that ruling to the U.S. Court of Appeals for the Eleventh Circuit (Eleventh Circuit). The question before the Eleventh Circuit was whether to treat the annotations in the OCGA in the same manner under copyright law as a legislative enactment or a judicial opinion. It is uncontested that legislative enactments and judicial opinions are not copyrightable, because they represent the exercise of sovereign power and are therefore considered part of the public domain. This policy is referred to as the government edicts doctrine. In October of 2018, the Eleventh Circuit concluded that the OCGA annotations were sufficiently “law-like” to be regarded as a sovereign work and therefore not copyrightable. For more in-depth explanations of the facts and issues in this case, see our earlier LegiSource articles published April 2017 and December 2019. 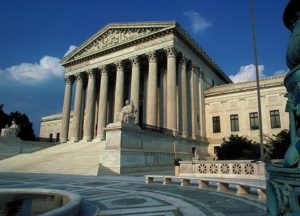 The Supreme Court upheld the decision of the Eleventh Circuit but for different reasons.  Instead of examining whether written material carries “the force of law,” the Court instead focused on whether the author of the work is a judge or a legislator, observing that, whatever work that judge or legislator produces in the course of judicial or legislative duties is not copyrightable. Under the government edicts doctrine, judges and legislators are not considered the authors of the works they produce in the course of their official duties as judges and legislators. That rule applies regardless of whether the written material carries the force of law. And, according to the Court’s majority opinion, it applies to the annotations because they are authored by an arm of the legislature in the course of its official duties.

Justice Clarence Thomas dissented, joined by Justice Samuel Alito and for the most part by Justice Stephen Breyer, arguing that Georgia’s annotations do not purport to embody the will of the People because they are not the law. Georgia’s General Assembly does not enact statutory annotations under its legislative power.

The core question for Justice Ruth Bader Ginsberg, joined in her dissent by Justice Breyer, was whether Georgia’s annotations are created in a legislative capacity. Her answer? “No.” The role of the legislature encompasses the process of making laws—not construing statutes after their enactment. Justice Ginsberg observed that annotating begins only after lawmaking ends. In her view, annotations are descriptive rather than prescriptive, and they merely provide the public with convenient references.