This week LegiSource continues its series on the statutory committees that oversee the legislative staff agencies. So far the series has looked at the Legislative Council and the Audit Committee. This week, we review the history and duties of the Committee on Legal Services.

The Office of Legislative Legal Services (OLLS) and the Committee on Legal Services (Committee) were created in 1968 in Senate Bill 1 – an act “Concerning the Administrative Reorganization of State Government.” Section 178 of the bill established a Legislative Drafting Office as part of the legislative department “in order to promote the careful consideration of bills before their presentation to the general assembly by making the best technical advice and information readily available to legislators . . .”.  Prior to this date, employees of the attorney general’s office in the executive branch drafted the bills. Although renamed, repealed, and reenacted, the OLLS and its purpose remains the same. [Section 2-3-501, Colorado Revised Statutes (C.R.S.)]

The General Assembly created the Committee, originally called the Legislative Drafting Committee, to supervise and direct the operation of the newly created drafting office. Again, there was a new name, some new wording, but still the same purpose. See also, “Legislature Passes the Laws – But Executive Branch Used to Write Them” (November 3, 2016) and “Revisor of Statutes Ensures Access to Colorado’s Laws” (November 17, 2016). 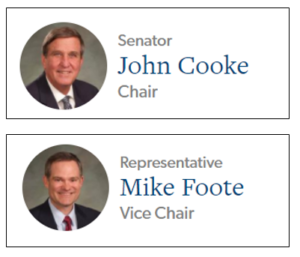 members include the chairs of the House and Senate Judiciary Committees, or their respective designees, four members appointed from the House of Representatives, and four members appointed from the Senate. There must be two members appointed from each major political party, and at least one member from each party in each chamber must be an attorney, if there is an attorney in that party and chamber. The Speaker of the House, the President of the Senate, and the minority leaders of each chamber, appoint the Committee members from their respective parties and chambers, subject to the approval of a majority of the members in each respective chamber,  within the first 10 days after a first regular session convenes. The Committee selects its own chair and vice-chair. The Committee may meet as often as necessary, but is required to meet at least twice in each calendar year.

The Committee has the following statutory duties: